Rapido Trimarans is delighted to announce that Windcraft Multihulls, headed up by Don Wigston, is now our second dealer located in the USA.

Windcraft is based near Pensacola on the Gulf of Mexico.

Don grew up in New Zealand which is where he discovered that sailing was in his DNA.

He moved to the USA in 1979 to further his earlier career as a neuroscientist.

He bought his first trimaran, a Corsair F-27 in 1993, which he cruised and raced around the south east of USA . In 1997 Don became a dealer for Corsair Marine, which was then owned by Rapido Trimarans’ co founder, Paul Koch.

At that time, Don upgraded to a Corsair 28R and in 1998 he assumed ownership of his local Corsair dealership.

In 2000 Don resigned his job, as he puts it, “a mad scientist” to concentrate full time on sailing and selling trimarans. Don moved his dealership, Windcraft, to the Gulf of Mexico coast in Florida near Pensacola.

Over the years, Don has won his share of National Championships on different trimarans – including the F-28R, Sprint 750 and Pulse 600 classes – and has crewed on larger ocean racing catamarans such as the Gunboats.

As a trimaran specialist, Don describes adding Rapido Trimarans to the range of exciting multihulls that Windcraft offers its customers as “a natural move”.

In turn, Rapido Trimarans’ Paul Koch says, “It is fantastic to be working with Don and Windcraft again. We have a very long association with each other.

“Don is widely known and regarded for his commitment, passion and expertise in the world of trimarans. Current and new Rapido customers will be very well served by Don”, added Paul. 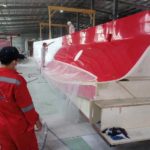 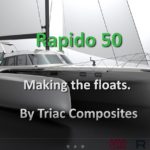 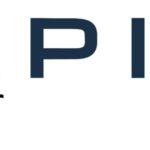 Below is a snippet of what has been happening with Rapido Trimarans...