The Vision behind the Rapido

Have you ever had a consuming passion for anything?

While trimarans may be a niche market, it is a market that he has essentially devoted his whole working life to developing.

Paul owned and operated OSTAC (Ocean Sailing Trimarans and Catamarans) Yachts from 1986 to 2008 and then the trimaran company, Corsair Marine from 1994 to 2010. Pioneer Paul, renowned for his passion and vision, has been credited with driving many innovations in the multihull industry – especially in building production trimarans.

But Paul had always been convinced that there was a missing segment in the sailing market: an ocean-cruising trimaran that was owner-operated, powerful enough to accelerate out of any potential trouble – and could be safely crewed by two. Enter the concept for the world’s fastest production cruising trimaran, the Rapido 60. Armed with the concept, Paul approached his friend, Pete Melvin, from world-acclaimed naval architects, Morrelli & Melvin Design and Engineering. Their brief was to develop the design and engineering for the Rapido 60. 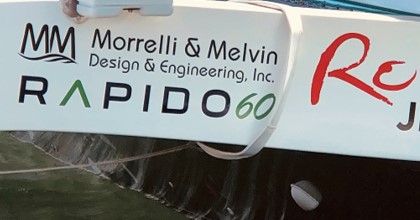 Rapido Trimarans believes Morrelli & Melvin Design and Engineering is the best qualified and most professional multihull design/engineering company in the world.

Combined with their developmental work on cutting edge technology behind America’s Cup campaigns and other world famous projects, we believe they have the perfect balance of technical knowledge and hands-on experience.

They then designed the Rapido 60 (to be followed by the Rapido 50 and Rapido 40) and gave the plans to Paul to commence the build.

Triac Composites is the manufacturing arm of Rapido Trimarans.

It was established in Vietnam in 2014 by Paul and co founder, Richard Eyre to build the Rapidos. Importantly, Triac would deliberately diversify its revenue stream by opening itself up to the marine industry more generally as well as non marine.

Composites are especially well suited to the marine industry because they are light, super strong, non corrosive in salty environments and can be moulded into virtually any shape. These qualities are highly sought after throughout the marine sector more generally as well as other industries.

Examples of our composite work includes:

Triac Composites has an international management team and technical staff. We employ nearly 100 local staff – many of whom have been with Paul since he first opened a composites manufacturing plant in Vietnam back in 2006.

Holiday in Vietnam and visit factory

Vietnam is a hot destination for tourism. Last year, more than 18 million visitors travelled to Vietnam which set a new record.

What we are finding is that a number of our international clients are visiting Vietnam for a holiday – and then, while they are here, visit our factory in Ho Chi Minh City (HCMC).

Our modern facilities, equipment, talented staff and new factory which is located on the Nha Be River, just 40 minutes from the centre of town has impressed each of our visitors.

Why don’t you travel to Vietnam for a holiday and visit our factory in HCMC??