Multihulls World magazine is describing the Rapido 40 as “a folding speed machine” in its November / December 2019 issue (#168). See the in brief article below.

When the idea of launching a 50-foot folding trimaran came up, Rapido’s reaction was something like, “Are you crazy?”.

So, with the Rapido 40, things have calmed down a little.

First because naval architects Morrelli & Melvin were ready to take up the challenge, and second because at the trimaran builder, a lot of people had previously worked for Corsair. So just like that, the project for the 40 was
launched!

The Rapido 60 had won us over with her speed capabilities: this 40 should also set the speedo alight, with her C-shaped foils and carbon rig – in Racer version.

The central hull has a very narrow waterline beam. A reasonable volume is still ensured thanks to a very marked chine. Australia's Cruising Helmsman Magazine has published a review of th... 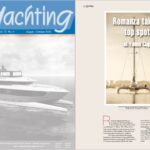 "Why put up with such nonsense?", asked Ineffable's owner "I remem...