Morrelli & Melvin discuss the cutting edge technology they use in modern yacht design and specifically, the Rapido trimarans.

To view the whole article online, click here. (Note, this article was originally published in the Winter 2021-22 issue of Multihull Sailor magazine. It was also published in Sail Magazine on 23 March 2022 under the heading, Cutting edge technology for multihull design.)

Below is a selection of quotes taken from the article.

If you’ve watched America’s Cup or grand prix sailboat racing you may have noticed the mindboggling technology that goes into moving a mass of magnificently crafted composite around some buoys or around the globe… Today’s performance-cruising boats leverage trickle-down technology from the racing circuit to become sophisticated platforms that are within reach of the average sailor.
Take, for example, the Rapido 60 bluewater cruising trimaran from Vietnam-based Rapido Trimarans (rapidotrimarans.com), which looks like a rocket ship, but was just purchased by Riley and Elayna from Sailing La Vagabonde for their family of adventures, including two kids under the age of three.

The innovative technology that went into the design and construction of the boat is what makes it a top choice for cruising. So, what goes into the making of a game changer?

We spoke with Erik Berzins, yacht designer and partner at Morrelli & Melvin (M&M: morrellimelvin.com) to find out the three main phases of designing a boat like this.

In the case of the Rapido 60, the result of all this work, is a modern marvel offering a combination of cutting-edge bluewater performance and ease-of-use. Under its hood, the Rapido 60 has the benefits of all the tools and analysis used by one of the leading multihull design firms in the world…

The boat is approximately half the weight of a 60ft performance catamaran with an equivalent sailplan and has a high-modulus rotating carbon mast. The trimaran’s wider beam generates more righting moment than a same-size cat, making it safe in even the worst conditions. It can also be easily singlehanded when the other crew needs to, say, keep an eye on the kids.

Boatspeeds top out at 25-plus knots with the helmsperson in comfortable control—a performance feature that is seen by its designers as a safety feature as well, since it allows the boat to sail away from an oncoming storm.

With all the validated high-tech processes that Morrelli & Melvin put into the Rapido’s design, the boat is a true game changer. Maybe it’s time it changed the game for you, too. 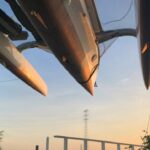 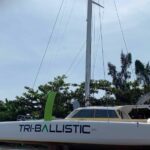