Romanza (Rapido 60) has just triumphed in the Royal Akarana Yacht Club‘s 230nm Yates Cup, which was held last weekend from 17-18 July, 2020.  The Yates Cup is an annual mid winter race around some of the islands in New Zealand’s Hauraki Gulf, commencing and finishing in Auckland.

Below, Romanza’s co owner and skipper, Dougall Love, reports on an exhilarating 24 hours!

The Yates Cup is known for being a tough race, either because it’s inevitably blowing too hard or has no wind at all!

The record of 21 ½ hours was set by the ORMA 60, Vodafone, back in 2014 and, given the forecast was for ‘fresh’ easterlies for the whole race, we thought we might be in with a chance of beating that.

The forecast started at 40+ knots one week out, but, that front moved through.

The first leg was a long windward beat of around 50 miles which became increasingly rough as we left the shelter of the Gulf.

This proved the undoing for 9 of the Race’s 26 starters (35 per cent of the fleet) with broken gear or seasick crews. Withdrawals included two of the top TP52s, which regularly race here, with damage.

At the first turning point, we lead by 1½ hours.

Although it was ‘bouncy’ on Romanza, we broke absolutely nothing, stayed completely dry and still managed a hot dinner straight out of the oven for our eight crew (except for a couple too seasick to eat).

(Ed’s note: prior to publishing this report, we double-checked the number who were apparently seasick. We spoke to Chef, Jaz Love, who said, “Sure, it was rough and cold being mid-winter New Zealand – and a long way out from the mainland – but I did the lamb shank dinner and it was only ME (one of the eight) who was too seasick to eat. Everyone else demolished dinner. I know, I served it!

So, let the official record show that there was only one seasick person aboard Romanza.)

[Track Romanza’s race in the Yates Cup 2020 in the video below.]

Next leg was a long reach of over 70 miles through the night in largeish seas. We ran with the furling gennaker and the staysail inside it. Although the breeze lightened off, we still managed to average high 13’s to 15 knots, with surfs way up on that.

The ORMA 60 Vodafone record looked beatable 35 miles out as we were tight reaching at 15-19 knots with either a full main or one reef, plus the jib.

The wind shut down

However, 10 miles from home, the wind shut down and it took us four hours to cover those 10 miles and literally drift across the line with the incoming tide!!

So, no record, but still an hour and a half ahead of the next boat which had breeze all the way in. Just over 24 hours for the race.

Romanza performed beautifully and although some of the upwind bouncing was quite ‘impressive’, we didn’t feel at risk at any time.

She is extremely strong and stiff and can be pressed hard without feeling anywhere near an edge.

Reaching in the big seas had its moments when the swell tried to control us, but a quick easing of the sheets and a bit of helm down turned that straight into fast surfing. Exhilarating, even when it’s pitch black!

Being dry when it’s intermittently raining (the nearest land actually had severe flooding) and there’s spray going everywhere except into the boat, is wonderful too.

We shared a not very sympathetic thought for all the soaking wet and cold crews perched on monohull rails while we were dry and warm!

So, a great race in a great boat with a top crew. Nice to be able to handle the difficulties that broke so many boats without a hiccup and to arrive home tired but warm and dry.

Coming in first by so far was a bonus and the tracker looks impressive as we gap-off from everyone else 😊.

“Well done!!! Sorry you missed the record but to be that close in a hugely comfortable boat is some feat.

“No hanging about for dinner on an Orma 60… It’s exit stage left. Congratulations!!!”

Below, video of Romanza in action in the Hauraki Gulf of New Zealand back in 2017. "Clients Dougall and Jaz Love are co-owners of the Rapido 60 Trimar... This morning, Dougall and Jaz Love (Rapido 60, Romanza) have caught... 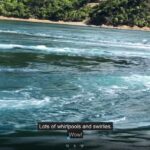